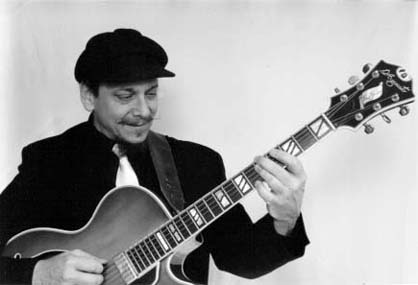 CLICK HERE FOR PAGE AFTER PAGE OF FULL REVIEWS

CLICK BELOW FOR INDIVIDUAL REVIEWS AND PAIRS OF REVIEWS

His marvelous new recording, "A Minor Scramble" was recorded in two sessions. Music from the two sessions are interspersed and show Elf's tremendous range and vitality as a player and conceptualist.


Elf plays with an earthy, warm glowing tone, spinning exciting ideas effusively that end up as authentic improvisations of shear beauty-- an affair of enchantment. You can feel Elf's soulful enthusiasm in the emotional temperature he raises. Elf is a serious Giant!

Jimmy Heath prefers guitar to piano in his quartet for the options it offers as a second melody instrument. He has only begun working with Guitarist Mark Elf, who already sounds quite compatible. Elf has more bite in his single lines than predecessor Tony Purrone, plus a contrasting ease when he shifts into extended chordal passages. His accompaniments are propulsive without crowding out the rest of the rhythm section, and give frequent indication that Elf is paying close attention to the soloist's progress.


New York has many fine guitar players and one of the best, although not so well known to the average jazz guitarist, is Mark Elf. Mark is one of a few of the really great bebop/mainstream players and is true to the tradition of the mellow archtop sound.

Clarity and celerity are the keys to Elf's expansive style, reminiscent of the great Raney. Elf's musical magic, in fact, brought not rain but Raney streams of splashy 16th and 32nd notes.

As with Elf's first recording, the playing is always assured and at times masterful, especially when taking boppish single line solos. Anyone who enjoys Joe Pass's early work on Pacific Jazz will love Elf's driving solos on this CD. Highly recommended.

Mark Elf continues to be one of the busiest and most respected jazz guitarists on the New York scene, both as leader of his own group and as a sideman.

Maurice J. Summerfield, The Jazz Guitar: Its Evolution, Players, and Personalities Since 1900.